History of our company 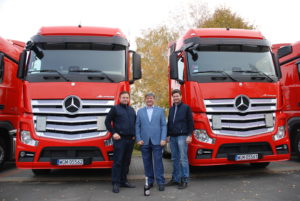 By a fridge truck to the east.

The history of Gerdex transport company from Rawa Mazowiecka, just as of many other polish companies from this type of business are interesting. Its owner Gerard Kaczmarczyk, car mechanic by profession, fruiter by fondness, some years ago has never even imagined that fate will cast his lot with trucks and managing business on two continents. His accomplishments have to make an impression. His transport fleet counts twenty trucks with cooling trailers, and its ‘part’ also holds a modern base in Rawa Mazowiecka.

Tough and trusted – have to be the people who drive to Russia and Kazakhstan. Complete drivers crew. In centre (wearing a tie) stands the company owner – Gerard Kaczmarczyk.

This stage went on till the end of the year 1989. The fruit farmers winter of the century came- fruit trees in the whole country were lost due to extremely low temperature. This bad luck also reached the Kaczmarczyk’s farm. They have lost 15 hectares of orchard. The only thing, that could still bring profits was the Jelcz 315 truck, bought with money earned earlier on. “It survived only because I did not forget to drain water from the cooler.” Says Gerard today, laughing. I bought this truck in poor condition, installed a new cargo box with a collapsible hood and started distributing fruits again, only this time grown by other people. This type of activity not only allowed to support his family, but also develop the company. The first brand new truck was bought, it was a Liaz with a build up, but it was no ordinary box or container build up, but a garbage truck. Today it seems odd, but in those days such paradoxes were common. The prize of a normal Liaz with a container build up was 1500 USD higher, what is more the waiting time for the truck delivery was several months. Therefore Gerard Kaczmarczyk bought a BOBR garbage truck, which on the way from Czech Republic where he picked up this beauty, he sold immediately to the sanitation department in Opole. The truck frame went to POM in Dębno near Kraków, where a box build up had been installed and the rear driveshaft had been changed for one with road drive train. 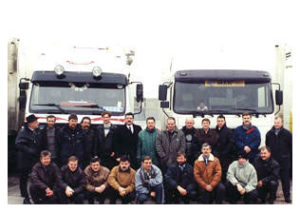 Year 1989 meant a breakthrough in a way and scale of running a business for many polish traders. The freed, fasted market absorbed all kinds of articles. Also citrus fruits and bananas, which until this time were only occasionally present in shops during holiday time. Till now these fruits were imported mainly from “befriended” Cuba. But now it was also possible to import these fruits from Spain or Marocco, therefore Gerdex company was registered in 1989 in order to import such fruits. Better equipment was necessary to transport these fruits. The first purchase of specialized equipment was made in 1991, it was a used, 10 years old three axel Lamberet fridge able to hold 24 pallets, which was bought from Pekaes in Blonia. The truck for this fridge was purchased by the owner in Holland. It was also a used Mercedes 1733, that also had several years at work. The next purchase was a Mercedes 1933 with Cherau fridge, bought in 1993. The business developed, but not too well, and the competition did not sleep.

The Polish market and its potential became the focus of interest of foreign capital, which dealt better than Polish traders not only with financing transactions, but also with Polish customs laws and regulations. Citrus fruits and bananas were now brought to Poland by ships. “Not only me, but also many other Polish companies could not deal with this”- says Gerard Kaczmarczyk.” I earned some experience, but again I was left only with trucks and contacts. Fortunately it was enough not to be left empty handed.” Gerdex had been hired as goods carrier by a large fruit importer. It was not only courtesy towards a former rival, but also a wise business decision, because who knows better how to transport fruits, than people, who have transported them for several years from distant Spain.

This time the southern specials were suppose to go to Moscow, but Russians had no professional fruit maturing devices. This process had to be carried out in the fridge truck during transporting process. The difficulty was to carefully control the temperature inside the fridge, and the work of the aggregate by the driver. Two aged Mercedes trucks went ahead to “conquer” the east and started earning money for next trucks. Each truck travelled 1,5 million km over the period of several months! They travelled even to Alma Ata. It was a good period of time for the transport company. During years 1993-1998 the company developed and bought more trucks. These still were used trucks from western Europe. Ranaults and Dafs travelled under Gerdex logo, but the stem of the company were Mercedes trucks. This was dictated by the simplicity of these trucks as well as the availability of mechanical services in Russia. Throughout many years trucks of this brand were purchased by the largest Russian transporting company Sovtransavtro. Besides they handled well.

When the Russian crisis started, Gerdex fleet looked like this.

Year 1998 brought the collapse of the Russian market. Many people lost vast amounts of money, because from day to day each dollar was worth 30 cents. This crisis did not affect Russians as much as it affected foreign suppliers and Polish transporting companies, that did not get payed both for goods and transporting services, adds Gerard Kaczmarczyk. Besides some transporting companies lost their freights, because there were no goods to transport. Again there were trucks and drivers for whom the job had to be seek. What is more, it had to be the same direction, because is difficult to get permissions to go to the west, although we also travel there. Now we still transport fruits and from some time now also meat and other type of food.

Difficulties in the Russian market also have another background. The common spread opinion is that it is a dangerous direction to go. Gerdex owner acknowledges that there are some risks, but often the cases of mugging and stealing are caused by the drivers care freeness. A great problem is the long waiting time on boarders. Since there are only two border crossings, long waiting lines are inevitable. This causes also other problems, connected to drivers working time and greater client demands towards the delivery time. Russians are currently dealing with customs regulations and nowadays it is much easier and faster to cope with customs clearance. It is difficult to find drivers appropriate to work in such conditions. In Gerdex 85% of the crew is steady since a couple of years. Unfortunately recently due to new regulations concerning drivers working time, we have to look for new, trustworthy drivers who know the east. This is not easy since suddenly there is a lack of drivers.

Despite some trouble the company still develops. It shows when You look both at trucks as well as the base. Recently the fleet was extended by two used, but in perfect condition Renaults magnum and three brand new Dafs 95XF. Also impressive is the Gerdex base in Rawa Mazowiecka. Parking square with the area of 4 hectares and 2400 square meters building with offices and workshops, bought from the liquidator of the meat company in Rawa. This building was ruined and had to be rebuilt from scratch. Nowadays the former ZM base comes in white and blue colours. The owner plans to create a canter for truck handling not only for his own trucks, but also other transport companies. 1,5 hectare of square space had been bought from Gerdex by a befriended company Krzysztof Polak Transport and Spedition. Besides four out of seven full size, capable of holding whole truck and trailer working stations are rented to companies closely related to transport, mainly Thermo King cooling devices authorised service, Tacho Tax- tach service and already mentioned earlier on K.Polak company. Drivers can use a well equipped workshop, as well as a modern truck wash, bought together with K. Polak . Also organising a safe parking lot for trucks and Road Transport Inspection Department is in plans. “The location is good, next to Warsaw-Katowice freeway, not far away there will also be the freeway from western to eastern Europe”- says Gerard Kaczmarczyk. “You have to be an optimist and look forward into the future, and then there is always something more to do.”

Director of transport and forwarding: